I’ve said this before, but one of the problems with learning analytics is that it’s still seen as a fundamentally technological project, not a psychological or pedagogical one. This post is an attempt to try and describe why changing student behaviour is so difficult.

I’m going to start from the position that the Clow (2012) learning analytics cycle is a good (if high level) description of the processes required to identify a student at risk and then plan an intervention. However, it’s the job of everyone working in the field to fill in the details of each section, this is an attempt to start looking at the ‘intervention’ section. 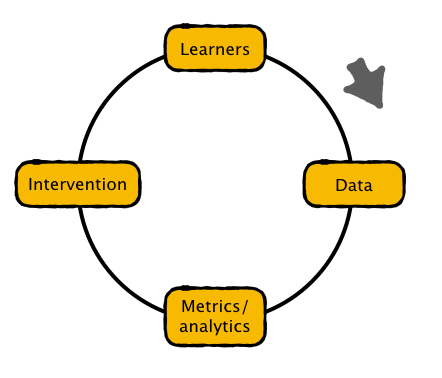 At our institution, the most likely trigger for an intervention is an automatic ‘no-engagement’ alert where after a fortnight with no engagement against any of the data points used in our Dashboard, the student’s tutor is sent an email asking them to make contact. Our early warnings are based on low engagement, factors that we know are strong indications of the risk of early departure. 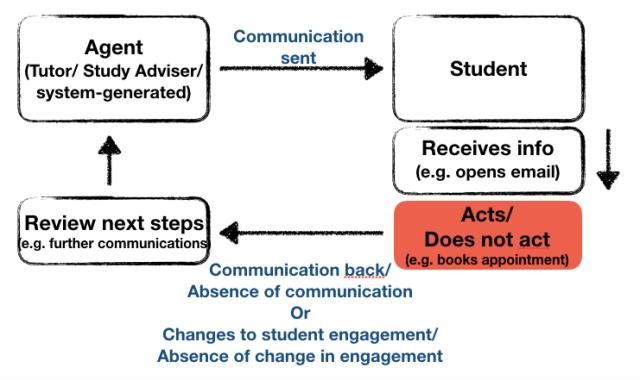 In this model, the agent (the personal tutor at our institution) acts by communicating to the student (usually via email). The student then has to actually receive the communication (open the email) and choose to act. This is of course by no means an automatic process. The cycle is continued when the tutor either receives a response back from the student, or can see changes in their engagement through the Dashboard or sees neither. In all cases there’s potentially a need for further communication.

I’ve been looking at psychology and business texts about decision-making, heuristics and risk management. I’m by no means an expert, but I’m seeking to apply the logic of the discipline to the field.

The cost of change

At the most fundamental level, the decision to change is based on the trade off for the individual between the additional effort required to change balanced against the perceived value of doing so. In a world of no guarantees, telling the student that they need to work harder to guarantee passing whereas if they stay the same, they might still pass becomes a quite complicated calculation. One recent paper, suggested that when confronted with nudge interventions that warned students that based on the current hours worked they were unlikely to achieve the grades they were hoping for, students lowered their expectations rather than increased the hours worked (Oreopoulis and Petronijevic (2019).

I think that we also need to consider a student’s self belief and self confidence. A student might understand that they need to work differently, but might not believe that they can do so (whatever the objective reality). This may be a particular issue for students who feel that they have fallen behind. Tutors may have designed the curriculum with lots of small attainable steps, but if a student has missed these lessons managing their own learning to catch up may be outside the Vygotskyan ‘zone of proximal development’. If a goal is perceived as unattainable, it’s always going to be difficult to work towards.

This is further complicated by heuristics. These rules of thumb are really valuable mental shortcuts that enable us to cope, but they contain certain inherent problems that may contribute to overconfidence, conservatism and complacency.

Essentially the availability heuristic helps us make decisions. If faced with a choice, we essentially look for examples of when we’ve done something similar in the past. If it worked out okay, then it seems reasonable to assume that it’s going to be okay in the future. This is a really useful shortcut when facing familiar decisions or unchanging environments, but may be particularly unhelpful for first year students who haven’t realised that the new learning environment is not the same as the old one. If a student did well in their college studies, then of course they’re going to expect to do as well at university.

Irrespective of the reality, almost all people have an optimistic outlook. If we didn’t have this tendency, we wouldn’t get out of bed in the morning and we certainly wouldn’t play the lottery. There are many studies that show students have unrealistic expectations about their likelihood of academic success. In 2011, we asked first year students about the grades they were expecting to achieve (54% believed that they would end their degree with the highest grades (1st class) (Foster & Lefever, 2011). The actual number who achieve a 1st is, of course, far lower.

As a species, we tend to make decisions quickly and then use evidence to justify that decision. Students are likely therefore to pay more attention to evidence that shows they’re doing okay, and downplay evidence to the contrary.

Finally, we all tend to edit our own histories. This helps justify our current position, maintains a coherent narrative about our life story etc. There was an interesting poll published by YouGov in 2015 about public opinions about whether the invasion of Iraq was justified at the time. It showed that in 2003, 54% of the public were in favour of the invasion, whereas in 2015 only 37% of the public remembered being in support of it. Sampling and methodology issues aside, a significant re-remembering appears to have taken place. Evans (2012) cites an interesting piece of work that people are often very poor at remembering when they made mistakes. We all know we made them, we just struggle to recall the specific time that we actually did.

Taken together, we have a dangerous combination. Not only does change potentially require more work, it also has to overcome the heuristic traps we set for ourselves: the stories we tell ourselves that we’re going to be okay because we’ve been fine in the past.

Hmm. So what breaks through?

Addition – 20 cognitive biases that screw up your decisions

A respected colleague retweeted the graphic below of 20 cognitive biases that mess up decision making. I thought it was worth adding to this post, as it’s so well illustrated. Sorry it’s not particularly accessible, but the 20 biases are in the alt text. 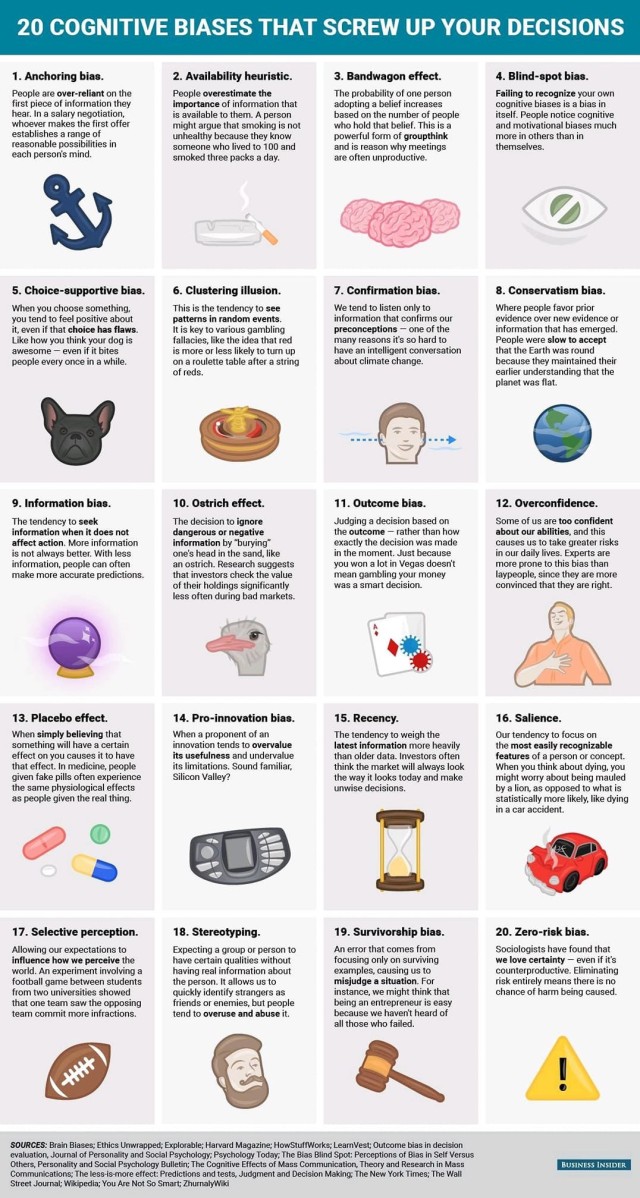 The original (all credit and kudos to the authors) can be found at https://pbs.twimg.com/media/EqxDmV2VQAEzR5_?format=jpg&name=large

And the proverbial motherlode appears to be:

Finally because I’m aware that most students are at an age where they are transitioning from adolescence into early adulthood, I’ve also been looking at:

4 thoughts on “Changing student behaviour: heuristics and other psychological barriers”