As a child in the 1980s I read a lot of comics. Well I read a lot of 2000AD. Spiderman, Batman etc., didn’t really appeal. Homegrown, punky, weird sci fi suited me far better. Alongside Judge Dredd and other hardbitten heros was a quirky series known as Future Shocks (imagine Black Mirror but in a comic). Sometimes the plots were a bit formulaic, but most of the time the twists and reveals were just as thought-provoking as anything written by Philip K Dick or featuring in episodes of Dr Who.

For years I’ve carried around a strong memory of an episode of Future Shocks that always felt relevant to our work in learning analytics. I’ve been looking for this story for some time now. I’ve spent some time searching through the collected editions of 2000AD stories and the Future Shocks wiki. And I found it. The story, Benny’s Tale, (author unknown, drawn by David Jackson) was originally published in the 1980 2000AD Christmas special. It’s been reprinted in The Complete Future Shocks Volume 02.

Benny is a particularly stupid citizen of Mega City One, he attends a get clever quick treatment. The technology works, and Benny gets super smart. He grows cranial bumps on his forehead and becomes an object of desire. However on the final page it all goes horribly wrong when Benny steps into the road to stop a run away robot car. He spends an age calculating the speed, direction, chances of the car being owned by a beautiful woman and only very late gets the message that the most important thing is to get out of the way of a speeding car. It sort of ends with a splat. 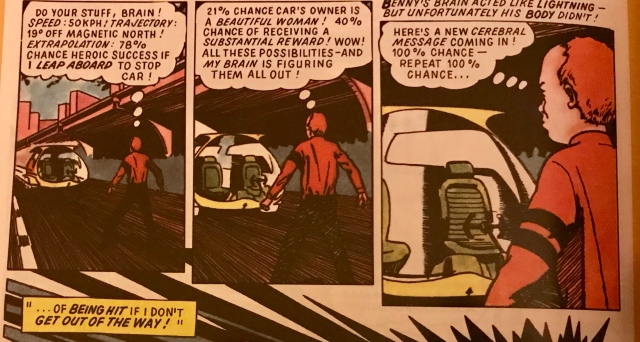 In the final scene, Max Atlas, the owner of the get clever quick programme wonders what happened to our hero.

“I wonder where Citizen Bean is today? It’s not like him to be late. This is his last lesson too – “How to make decisions … fast!'”

Was it a good prediction of the future? Well it starts with a traffic jam caused because Benny couldn’t read paper maps, people learn via cranial shock machines and teasmaids still feature in the future.

But there are robot cars.

In some respects the more interesting questions are about how the cultural norms have changed. The whole Future Shocks volume features more people with green skin than black, and the leads are nearly all male. It’s unfair to make judgements about the norms from 40 years ago, but it is fascinating to see how assumptions have changed (you have no idea uncomfortable I was writing ‘stupid’ above).

What can we learn from Benny’s Tale?

However, we are a sector (and a society) drowning in data. This week I’ve been discussing the problems of learning and acting from learning analytics data, from market research surveys and from interviews with staff. Our practices of acquiring vast quantities of data is developing far faster than our ability to pause, meaningfully interpret, reflect and act on it.

Look out, there’s a run away robot car careening down the road for all of us.